Back in the day, when hip hop was still relatively new, the culture was defined by its four main elements – deejaying, emceeing, breaking, and tagging. Over the years, people have made the case for additional elements, from knowledge of self to fashion to business to visual art to poetry to plays to cinema and beyond. One element that you probably haven’t come across is that of the idea of hip hop architecture, but Sekou Cooke is here to make the case for it. So, what is hip hop architecture? At its most basic definition, Cooke declares that it is ‘Hip-hop culture in built form.’ Of course, this is just enough to get the ball rolling, because Cooke is not simply discussing new architecture with a hip hop aesthetic to it (although he does get to that) – he’s breaking things down and looking at the way that hip hop has traditionally addressed the building process, from the disruption and innovation of early deejays to the way that lyrics are built and layered to the ever evolving world of street art. He is then breaking apart the legacies of race and gender and sexuality as well, alongside the history of architecture and urban planning so that we can now move forward into the present day and look at current spaces and structures and their conversation with the larger world of hip hop. This includes discussion of hip hop artists like Tajai Massey of Heiroglyphics, who went back to school at UC Berkley to get his MA in architecture in 2014, or Kanye’s visit to the Harvard Graduate School of Design and his commitment to work with architects in regards to his DONDA Studio. He is then continuing to look forward as he discusses aspects of the field such as Afrofuturism and activism within the scope of hip hop architecture. As you can tell, there is a lot to cover, but Cooke does an admirable job of outlining the entire scope of what hip hop architecture is, where it comes from, and what it could become. He does all of this in a way that is very well researched and carefully planned out, but also incredibly accessible to the lay person. Anyone can pick this book up and develop a knowledge base about hip hop, design, urban planning, and building. It should also be noted that the book has an fantastic visual layout, as you might hope, given the subject matter, filled with graphics and photos to help illustrate all of the subject matters that Cooke is covering over the course of the book.

Hip-Hop Architecture might not be the most obvious subject matter for those that like to read about hip hop, but Sekou Cooke does an excellent job with this book in creating something that is engaging and easy to understand, but also will propel you to think deeper about issues that you may have taken for granted and will hopefully inspire you to study further. 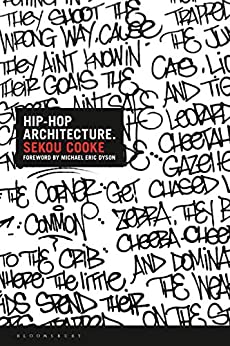