Rebekah Farrugia is Associate Professor of Media Studies and Kellie D. Hay is Associate Professor of Cultural Studies, both at Oakland University in Detroit. About ten years ago, these two colleagues, who didn’t know each other particularly well beforehand, embarked on a journey of not just studying but becoming involved the Detroit hip hop scene through a women-centered hip hop collective called The Foundation. The result of all their research, involvement, and hard work is now available in their book, Women Rapping Revolution: Hip Hop and Community Building in Detroit.

Writing a book like this is always a combination of good luck of being in the right place at the right time, but also being good scholars, researchers, and allies, so that a book like this can come out of your involvement in a scene like Detroit’s. The good luck comes in the form of two scholars in Farrugia and Hay, from Windsor and Oklahoma, respectively, being on staff at a university in Detroit, when one of them saw a listing in The Metro Times for a women and hip hop event. It was formally known as The Foundation of Women in Hip Hop, but locals just called it “The Foundation.” It started simply as an open mic night, but the organization soon grew and evolved. The good scholarship, research, and allyship is readily evident in the book, and Farrugia and Hay chronicle and analyze the scope of their journey with The Foundation. Over the course of the book, the two scholars mainly focus on a core of women and non-gender conforming artists, organizers, and activists, consisting of Miz Korona, Nique Love Rhodes, Mahogany Jones, Insite the Riot, Piper Carter and ill weaver. Certainly many others are included as well, but these names in particular represent a lot of the core of The Foundation. Through conversations, observations, and organizing events together with them, Farrugia and Hay are able to provide a lot of context and analysis to the different issues at play within the scene. This includes everything from the historical and sociological context of the Detroit hip hop scene in the early 2010s, to the state of the city itself and all of the different factors of race, class, and city planning that affected the way the city grew and changed across the time they spent with The Foundation. It also includes factors within the organization itself, such as gender identity, sexual orientation and expression, and their relationship with the word “feminism” and how they chose to or not to practice it. They also serve to highlight issues that they run into along the way, such as the dearth of women producers in the city, meaning that these artists had to often find men to producer their albums, which then turns into a discussion of both why this is, and how both sides can navigate the situation, and how the men making hip hop beats in Detroit can function as good allies. There is also attention paid to the ways in which The Foundation was able to grow and change, and how partnering up with different groups and events like Dilla Day and working with kids could lead to powerful change within the city. There is also attention paid along the way to the ways in which the two scholars themselves have to navigate the scene as outsiders who are also participating, not just observing, as they help organize events and bring ideas to the table for what the group could be doing, and also present work at conferences.

Women Rapping Revolution covers a lot of ground in a relatively condensed space, but it doesn’t lack for information or thoughtful analysis. On top of all this, they also manage to make it a very accessible book. Farrugia and Hay do an excellent job of not only getting you to understand all of the different factors in play within the hip hop scene in Detroit, but they’ll get the wheels spinning in your head as you consider all of the factors in play in your own city. 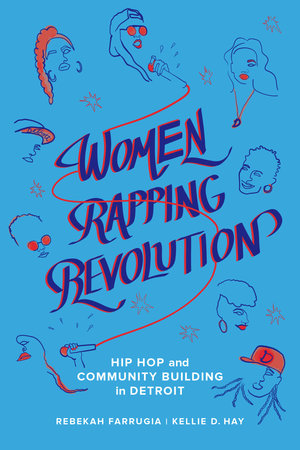