Ruby Yacht is a collective/record label that was formed a few years back by R.A.P. Ferreira (fka Milo). After grinding for a few years and trying to catch on with some other indie labels, he essentially said, “fuck it,” and assembled a bunch of people he was working with on a fairly consistent basis anyway, which included Pink Navel, Randal Bravery, Kenny Segal, Safari Al, SB The Moor, Nostrum Grocers, and Christopher Misch-Bloxdorf. With a few releases under their belt, they’ve now assembled for a crew album, 37 Gems.

There are, of course, multiple ways to approach a label/crew album like this, but the option that Ruby Yacht chose was sort of an “everybody in the pool!” cypher approach. By this I mean that we’re not getting fully formed songs from each individual member, and we’re not drawing distinct lines between everybody’s sound. This is more like all of the producers throwing down some weird lo-fi beats without worrying about making a fully developed song, and just letting all the different artists hop on and off the mic, adding their flavor to the proceedings. The closest comparison that comes to mind is anticon.’s Music For The Advancement of Hip Hop, but even then they’’re not performing as one big unit like Ruby Yacht is here. R.A.P. Ferreira is definitely taking the lead on the mic a lot of the time, and s.al, who has been right there with him since the beginning, is also right there with him on this album. Pink Navel does a good job of making their voice heard, with some distinct deliveries and verses that stand apart on their own. Overall, if you’ve been following Ruby Yacht, you’re going to know what to expect, but just in case this is all new to you, these emcees bond over some verbose language and abstract poetry and philosophy. Nowhere is this made more clear than on the track, “the ruby yacht is a poet gang.” That is to say that while this certainly won’t be for everybody, it will really, really be for a certain subset of hip hop fans who like to get weird with it.

37 Gems is an interesting crew album that doesn’t really get made all that much. It does a good job of bringing a few of the different voices to the forefront, and helps establish an overall aesthetic for those that aren’t familiar with their work. 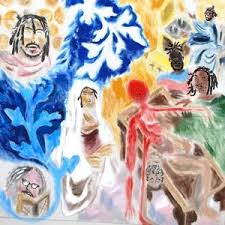