More or Les is an artist from Toronto that is part of the Backburner crew. He has been going strong as a solo artist since the early 2000s, working as a deejay, producer, and emcee. His most recent release was a beat tape that came out on Valentine’s Day, 2019, <3Les. Now he’s back with a full-length album focused on mental health, The Human Condition.

As you listen to the opening track of The Human Condition, “Assholes,” you just might be under the impression that this was some sort of novelty hip hop album. This isn’t to say anything bad about the song – it’s certainly something we can all relate to, and Les has made humorous projects before, but it might not prepare you for the serious discussion to come throughout the rest of this particular album. Once you dig into track two, “Living On Mars,” though, the real tone and subject matter of the album will come through as Les gets real as he describes feelings of isolation and loneliness. As you continue to work your way through the album, Les is creating space for some serious discussion about mental health issues. A lot of these are common issues, but they are often issues that we in Western societies don’t talk about and just assume that we’re the only ones dealing with these issues – feeling depressed, feeling anti-social, feeling overwhelmed, and not knowing when to ask for help and when to go easy on yourself. Even though we’ve made strides in talking about mental health within the hip hop community in recent years, we could always use more, and it doesn’t hurt that Les is a veteran artist that knows how to not only create this discussion within his rhymes, but he also makes sure that he still has dope bars, choruses that will stick with you, and beats that bump. Les has always tended towards an old school East Coast style of hip hop, and he sticks with what works for this album as well. On top of all this, even though there is plenty of serious discussion on the album, he also finds some room for humor here and there to lighten the mood a little and make sure the whole thing isn’t just one long constant bummer. He also brings in friends like Jesse Dangerously and Rel McCoy and Laura Barret so that the album doesn’t feel so sad and lonely, even when the subject matter might be specifically about feeling sad and lonely.

The Human Condition is a really solid album from a veteran artist that’s creating some much needed discussion within the hip hop community (or anyone else who needs to hear it). More or Les does it with great finesse, finds some great balance, and makes sure it’s still a dope hip hop album on top of everything else. 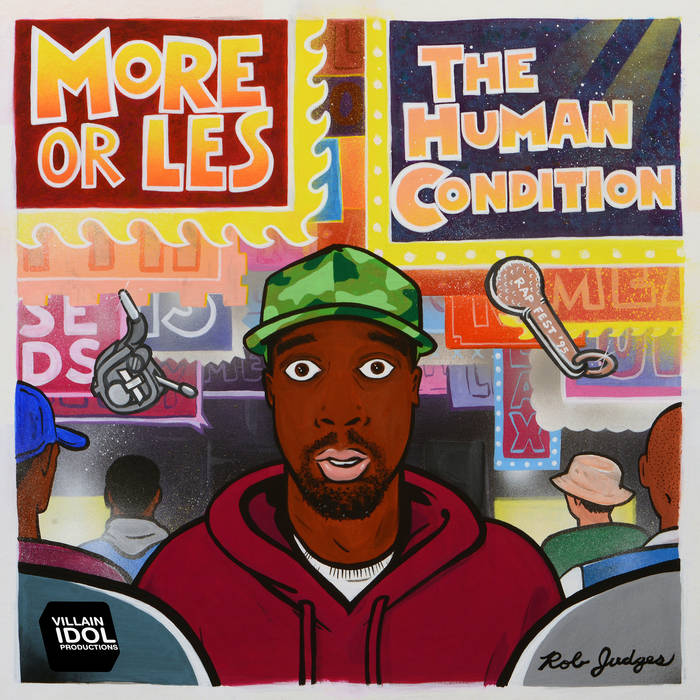