Kathy Iandoli is a veteran music journalist, having written for publications such as Vibe, XXL, and The Source, and edited for AllHipHop.com and HipHopDX.com. While there have been plenty of books about hip hop written over the years, there hasn’t been any real effort to chronicle the history of women’s contributions to the music. Iandoli noticed this, decided to do something about it, and now presents God Save the Queens: The Essential History of Women in Hip-Hop.

Women have been involved since the beginning of hip hop, which is one of the main reasons why Iandoli set out to write this book – for all the times that the history of hip hop has been told, women don’t usually even get mentioned until the mid to late ‘80s. Iandoli does this course correction at the beginning, discussing the instrumental role that Cindy Campbell played as organizer of the crucial party widely acknowledged as the birth of hip hop. She then traces the involvement of women in hip hop, primarily as artists through the years, ending up on Megan Thee Stallion in the present day in the epilogue. While the earlier parts of the book are good, you really get a sense that the late ‘90s and early ‘00s are Iandoli’s wheelhouse, as she seems really knowledgeable and invested in sorting out everything from the rise and fall of Lauryn Hill to the Lil’ Kim and Foxy Brown rivalry to the ascendance of Missy Elliot to numerous women who thought they might have their moment, only to get swallowed up by the industry or the legal system. She does a good job of breaking down who was on what label, what crew (if any) that they ran with, how they were marketed, and how they fought the sexist rumors that men were ghostwriting their rhymes. It becomes clear with how much time and depth that is spent on this part of the history that this is where Iandoli’s expertise lies.

For all the good work Iandoli is doing in focusing the spotlight on these women, the book is not without its flaws. There is an odd stylistic choice where the chapters often open in the first person, inserting Iandoli herself into the story, only to back off and assume the third person as the books shifts into a more traditional history storytelling. There are interludes throughout the book in which Iandoli already inserts personal anecdotes, and those work well, but it’s a little more muddled and confusing when it happens within the chapters. The other main problem with the book is its engagement of underground hip hop, or lack thereof. The book almost ignores the women of the underground, which would be unfortunate, yet understandable if the book only wanted to focus on the mainstream. Unfortunately, the book does worst of both worlds, barely acknowledging the underground, but then covering it poorly. She mentions Jean Grae briefly, quickly stating that she released Attack of the Attacking Things, but neglects to discuss how even in the world of independent music, Grae had her album Jeanius sit on the shelf for four years. Even worse, she brings in an interview with Dessa, completely out of context, just to get a couple of quotes about what it means to be a woman in hip hop. She fails to properly contextualize Dessa’s career in the grander scope of things, including the Minneapolis scene, and even deigns to call her “a published author and less-active recording artist.” That’s right, the woman who released a new solo album just last year and a live album last week is less-active.

God Save the Queens is an ambitious and much-needed project, and Iandoli covers a lot of it well, and when she gets to her area of expertise, the book really shines. The book does have it’s flaws, though, which are unfortunate, since it feels like with a few fixes this book really could have been great. 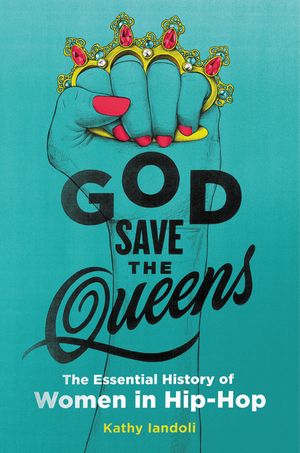 Previous: One Be Lo - The Looma (Part 1-5) Next: Mark Katz - Build: The Power of Hip Hop Diplomacy in a Divided World