F.Virtue is an emcee from New York who garnered some attention with the digital release on Fake Four of the 2013 album, We Are Not The Shame. In 2016, there was a series of singles released through Paper Magazine and an EP released in response to the shooting at Pulse in Orlando, but we’ve still been waiting for that proper follow up to that last album. Now the wait is finally over with Millennial Love in WWIII.

It’s funny how the artistic process can work. For years, you can have ideas and try to push yourself, but things won’t click, and then all of a sudden everything will line up and the art will just flow through you. That’s essentially what happened with F.Virtue. After working on these singles in 2016, going through some life changes, and absorbing different influences, Virtue basically said, “fuck it,” threw everything out, and then wrote and recorded this album very quickly. For the album, he wanted to capture the feeling of the basement parties he and his friends used throw while going to college in Allston, which comes through in the raw energy of the album. There is a certain “liveness” to the vocals, which combined with the production make for a very engaging album, one that feels like you’re only standing a few feet away from the stage. Virtue produces much of the album by himself, with some help from Steel Tipped Dove, Skinny Atlas, and Danny J., and cuts byt DJ Brace. The roots of the underground hip hop that Virtue came up on are still there, but there are also elements of folk, punk, and dance music coming through as well. Virtue has always worn his heart on his sleeve, so while there is an expansion in terms of flow and storytelling on this album, the earnest, passionate emcee is still the same one that you know and love. On the album, we’re dealing with stories of love, loss, depression, anxiety, addiction, celebration, friendship, and love again. It’s interesting, because F.Virtue is a queer emcee, and all of these stories are told through the particular viewpoint of a gay man, but in a lot of ways, in being so true to himself, he’s made an album that is really for everybody. Granted, there are particular songs like “Nowadays It’s So Cool To Be Gay (I Smile With Blood In My Teeth)” that deal with the specific experience of coming out and being bullied, something that I will never experience firsthand, so on those songs I just have to shut up and listen and absorb what he’s telling me. But when he’s pouring his heart out about a love that’s not working out, such as on “Don’t Tell the TSA (There’s a Bomb in my Chest),” or celebrating loved ones that have passed on “We Don’t Mourn, We Dance,” there are these connecting points that people from all walks of life can relate to. Nowhere does this come through more than on “Chain Gang,” featuring Slug. The Atmosphere emcee first met F.Virtue when Virture was a 12-year-old fan, but Slug had kept in touch and encouraged his career along the way, finally collaborating on the hook to this song, which in a lot of ways gets Slug back to his roots, with this vivid storytelling over lo-fi beats.

F.Virtue has been a unique artist for quite a while, an unapologetically queer male voice in underground hip hop that has been desperately needed. With Millennial Love in WWIII, we get an album that sees tremendous growth from him as an artist, as he gives an album that represents himself and the queer community to the fullest. It’s also a bold musical step that expands his sound in really interesting ways. It’s an album that provides a much needed voice to the particular experiences that F.Virtue has lived, and as a result he’s given us an album that we all need to hear. 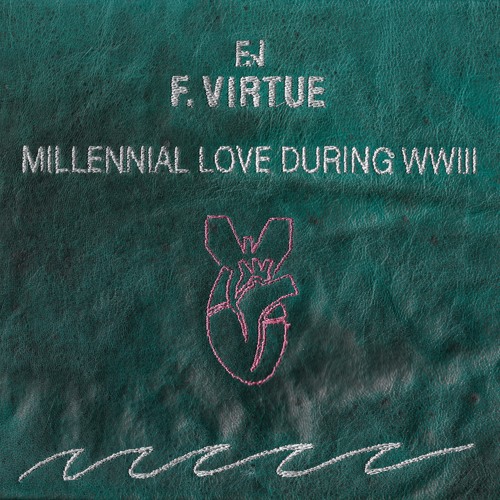