Savannah/Athens artist Dope Knife and Saskatoon producer Factor Chandelier have been in each other’s orbits for a while, with Dope Knife contributing rhymes on the track “Long Game,” on Factor’s most recent album, First Storm. Now they have formally teamed up as a duo for an EP, Kill Factory.

One of the first things that hit me about this EP is just how much it bangs. It caught me off guard because it had been a minute since Factor had been part of a hardcore hip hop project – most of his recent output had been of the more art rap/experimental hip hop variety, such as his work with Ceschi or his own solo work. But Factor is one of the most versatile producers working today, and he has a knack for tailoring his beats to the artist he’s working with. This is all to say that Kill Factory bumps and comes at you hard and doesn’t let up until the five tracks are over. Factor’s pushing the tempo just a little, and he’s having fun with the drum machines, hitting you with staccato rhythms that keep you on your toes. This ramps up the energy just a little for Dope Knife, because the tempo is a little faster than most of the beats on his last album, Things Got Worse. He’s more than up to the challenge, though, and doesn’t lose any of the clarity of his delivery. Also, if you’re familiar with Dope Knife, you know he’s happy to play the heel as an emcee, and so for five tracks he hops on the mic and talks his shit and riles up listeners and has fun getting under people’s skins as he cracks wise. Knife is also the type of emcee that likes to bury little nuggets of knowledge within all of his shit talking, so while the EP can hit on one level the first time you listen to it, you’ll catch all of these little asides and hidden double meanings with repeat listens that give the EP depth.

Kill Factory comes with that heat and doesn’t let up until it’s over. Dope Knife and Factor Chandelier have great chemistry together, and they’ve created a sound that is unique unto the EP. It’s a fun and rewarding listen. 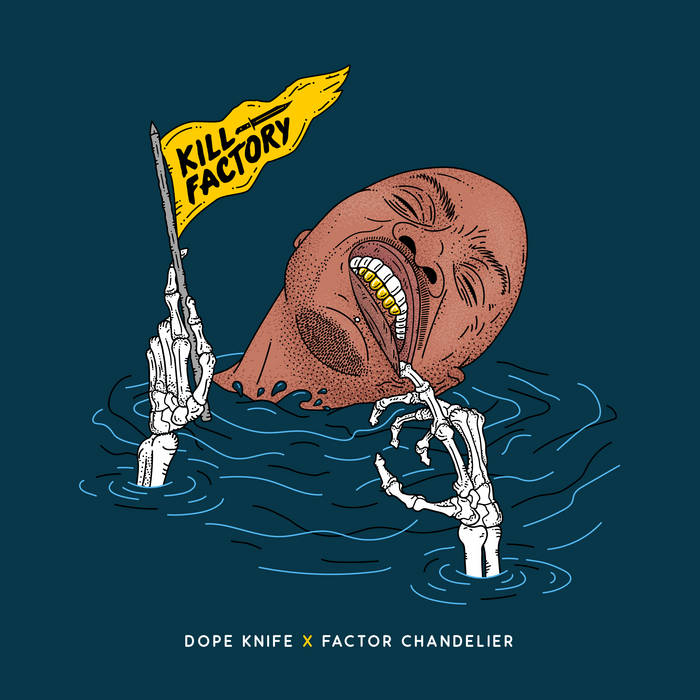