Few artists can fuck with Open Mike Eagle’s run through the 2010s. Starting with Unapologetic Art Rap in 2010 and working his way through Brick Body Kids Still Daydream in 2017, he established himself as a unique and creative voice in an overcrowded field. Eagle followed his last album up with an EP, but then focused on a TV show for Comedy Central with Baron Vaughn, The New Negroes. Everything seemed like it was going great for Eagle on the surface, but apparently not all was well behind the scenes, which he now processes on his latest album, Anime, Trauma and Divorce.

It’s weird listening to Anime, Trauma and Divorce, because it’s not like Eagle hasn’t been open and personal on his albums before. I mean, the dude has an album called Hella Personal Film Festival for Christ’s sake. However, in the past, while he’s been open about dealing with mental health issues like anxiety and day to day things like changing his son’s diapers, and he has talked about societal issues like racism and the economy, this is the first time that the album feels like it never even really leaves the house. In this way, it can feel a bit like a claustrophobic listening experience, but I mean that in a good way, because this is an album that is about ripping the band aid off and cleaning the wound so that it can heal properly. The anime is there as a coping mechanism, to try to relate to a piece of pop culture to help process the major life changes and find the strength to overcome the trauma involved, but you don’t necessarily need to be up on the particular series Eagle is referencing to understand the bigger picture of these songs. For the album, Eagle is getting production from Caleb Stone, Black Milk, Frank Leone, Loden, Gold Panda, and Nedarb, with some additional live instrumentation from Jordan Katz on horns and bass, and Davide Rossi on strings. Together, they are able to create a soundscape that ranges from meditative and reflexive to eerie and unsettling to urgent and frustrated. This fits Eagle to a tee, as he tries to make sense of everything that had been happening behind the scenes while everything seemed peachy on the outside. This can include everything from the anxiety of getting close to forty and wondering about his relevance and the state of his career in hip hop, to the ways in which money and business can mess up personal relationships, to yes, divorce, and all the anxieties that came baked within, everything from finding a new apartment to focusing on the moment when you knew your marriage was over. Now, there has been a long tradition of divorce albums in pop music at large, but there haven’t been as many within hip hop in particular, so there’s not a lot of specific precendent to look to. I always have just a little trepidation when it comes to listening to divorce albums, worried that the album could just be too messy or angry, or that it can swing too wildly in the opposite direction and just be depressing and wallow in the sadness. Well, while this isn’t a happy album to listen to, Eagle is able to strike a tone that is fairly even-handed, all things considered. He allows himself to feel sad and angry, but he doesn’t ask for your pity and he doesn’t try to start any new fights. He even finds some room for humor without sounding tasteless, with songs like “wtf is self care,” where he takes a moment to laugh at the suggestions that people and society at large offer up as ways to take care of yourself. So while this isn’t a “fun” album like other Eagle albums are, it is an incredibly mature and therapeutic listening experience.

Anime, Trauma and Divorce isn’t your typical hip hop album. Hell, it isn’t your typical Open Mike Eagle album. But it is a very necessary album, both for all of the personal issues that Eagle has been dealing with over the past year or so, but also for all of the different trauma all of us have been living through. Maybe line up a sillier album as a chaser, but do yourself a favor and sit with this album and appreciate just how deep Eagle had to dig to make an album like this. 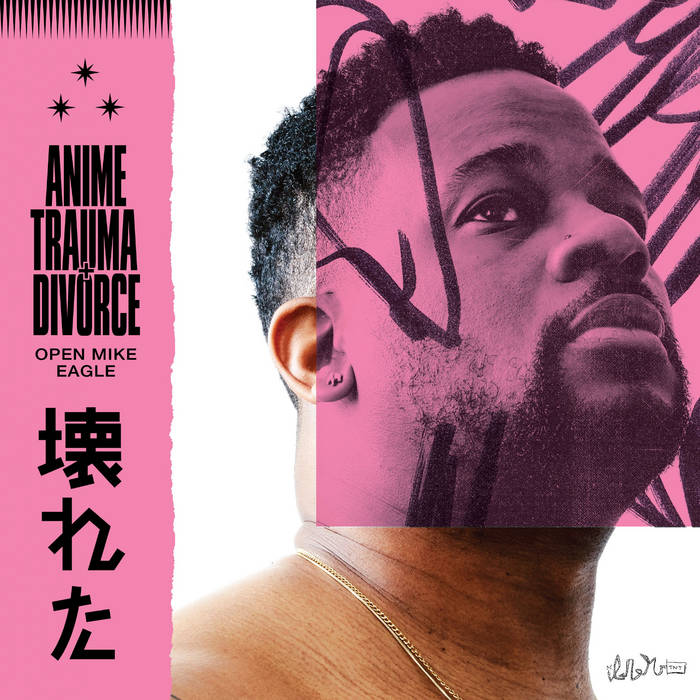