ECID is an emcee/producer originally from Minneapolis, but now based in Brooklyn. He was working at a very steady pace over the 2010s, giving us such projects as Werewolf Hologram, Post Euphoria 1 & 2, Pheromone Heavy, and How to Fake Your Own Death. After that last album in 2017, he relocated to Brooklyn. At the end of that year, there was an EP from him and Louis Logic under the name Toyfriend, but then there was a period of silence as he adjusted to this new phase of his life. He broke that silence last December with the teaser EP, Post Euphoria 3, but now we finally get a new full length album, Zen Repair.

Sometimes you press play on an album and there will be something that immediately jumps out and hits you over the head to let you know that an artist is doing something different and is taking things to a new level. Other times, when an artist is producing introspective music and just refining their sound to take it to the next level, you need time to sit with it and soak it all in to understand what’s happening. That was my experience with Zen Repair. When I first began to listen to it, I thought that it sounded good and that it sounded familiar, definitely in lineage from How to Fake Your Own Death. It was cynical and snarky, a little sarcastic in its sense of humor, and creative with that noisy midtempo funk that ECID has been known to lay down. As I sat with the album, though, I began to realize how clever ECID had been with the sequencing of the album, laying the foundation with a couple of familiar-sounding tracks before dialing things up and getting really honest and personal. When you listen to tracks like “I’M OKAY,” and “Whatever Heals You,” you start to see the outer layers fade away, and by the time you get to “Lifetime Contract,” in which he declares, “I’ve signed a lifetime contract to keep it real as fuck/Sometimes you got to burn it down just to build it up,” it is on. You begin to feel like you are having a long late night conversation with an old friend where you can really get things off of your chest. It’s not that ECID is doing something drastically different on this album, it’s that he’s digging deeper than ever to really give you the best version of who he is as an artist, both musically and lyrically. There’s not one point in the album to point to where you can make the easy sell for the brilliance of the album, although there are plenty of really good songs on the album. You just really have to sit with it and let all of these little musical nuances sink, whether they be weird keyboard sounds or drum patterns that are just slightly out of the ordinary, to really understand the level that ECID is working on and how it all fits together. This also holds for his lyricism – one song might make you think, “This is pretty good,” but as you sit with the work as a whole and realize how ECID uses cynicism and sarcasm as coping methods because he care a lot about this world and his place in it, and just how much been through over the last few years collectively, you begin to understand what a special album this is.

Zen Repair is a slow burn, but once you get there, this album burns hot and it burns bright. ECID took his time making this album, and by doing so he put more of himself into his music than he ever has before. It takes a little bit of a commitment to really appreciate the work he has done here, but it is definitely worth the time. 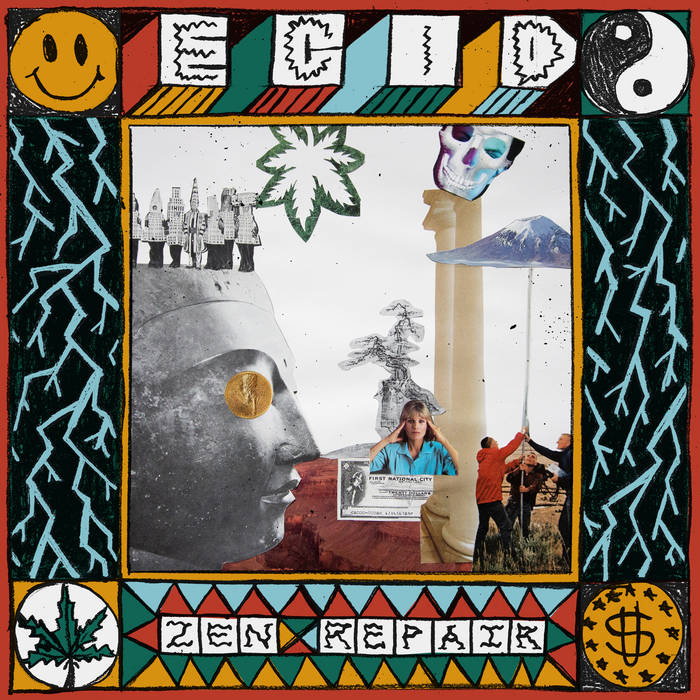